get to know BETHANY PRESBYTERIAN - A BRIEF HISTORY

A History of the Bethany Presbyterian Church (USA)
Graham, North Carolina
Based on the notes of Inez Florence Webster
Updated and Revised in 2022

The records of Orange Presbytery contain the date of the organization of the Bethany Presbyterian Church in Graham, North Carolina as May 29, 1892, but the people who were most familiar with her remember that long before she was organized into a congregation, Bethany was a Sunday school outpost that met in a school house somewhere down the road to Pittsboro near the Little Alamance Creek.  Holding meetings for religious education of the people in that area had been the dream of Rev. George Summey, the pastor of the Graham Presbyterian Church. 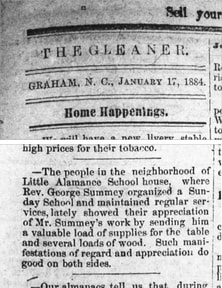 The Alamance Gleaner, January 17, 1884
Bethany was organized with sixteen members who for the most part were members of the Curtis, Rogers, Clapp and Dixon families.  The area churches that contributed to those first members were:  Graham Presbyterian, Hawfields Presbyterian and Providence Christian churches.  W.R. Cooper and E.R. Dixon were elected as the first ruling elders.
The Rev. W.R. Culberson was invited to serve as Moderator of the Session in September 1892.  He was subsequently installed as Bethany’s first pastor in May, 1895. The Alamance Gleaner, June 20, 1895
In October and November of 1895 Sallie Foust, Mamie Foust, James A. Foust and Mamie V. Rogers transferred their membership into Bethany from the Graham Presbyterian Church and by December 1896 Bethany’s membership roll stood at thirty with forty-two enrolled in the Sunday school.  In 1906 a call was extended to Dr. B.W. Mebane to become Bethany’s pastor.  At that time Bethany was one congregation in a four-church field.

Membership continued to grow and by 1924 there were one-hundred and eighty-seven members on the roll.  In that same year plans were begun to add more classroom space to the existing wooden frame building and in 1926 it was completed with the combined efforts of members or the church and community who were skilled carpenters.

Electric lighting was added in 1926 and a piano was given to replace the pump organ in the sanctuary.  J. Blair Long gave a beautiful pulpit and table that he had made for use in the sanctuary as well.

Bethany shared a pastor, Dr. Walter E. Harrop, with the Graham Presbyterian congregation during the 1930’s and with his encouragement plans were prepared to erect a new brick sanctuary and classroom complex.  The new building was begun in 1940 and completed in 1942.  By the end of 1942 the new building was completely paid for. 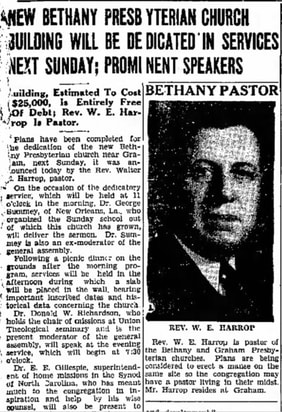 The Daily Times-News, October 1, 1943
In February of 1945 the Rev. Walter E. Buhler accepted the call to become Bethany’s first full-time minister.  He and his family moved into the newly completed manse that stands across the Swepsonville Road from the sanctuary.

Rev. Z.T. Piephoff became Bethany’s second full-time pastor in November, 1953.  Under his leadership Bethany continued its growth in membership and added a fellowship hall and educational wing to the existing building. 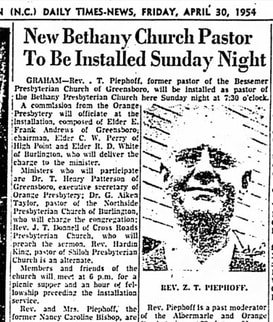 The Daily Times-News, April 30, 1954
Following Rev. Piephoff’s resignation the congregation extended a call to the Rev. Charles R. Carter to become Bethany’s minister.  Rev. Carter was installed in April of 1964 and served through the summer of 1967.  In the interim between Rev. Carter’s leaving and Rev. Norman M. Whitney’s becoming Bethany’s pastor the Rev. Dr. James M. Efird served as supply pastor.  In July 1968 a call to be pastor was extended to the Rev. Norman M. Whitney. 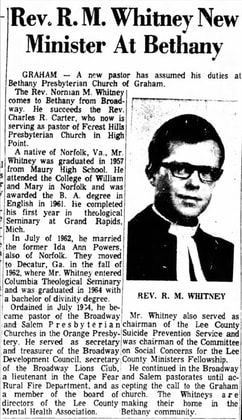 The Daily Times-News, August 23, 1968
During Rev. Whitney’s tenure as pastor, a building program was completed that added a second floor to the educational building, office space for the secretary and pastor as well as a renovation to the worship area.  A Zimmer pipe organ was added to the sanctuary, a new recreation building, gazebo and walking track was added to the area behind the manse.  The manse also underwent a complete renovation, providing an excellent space for meetings and social gatherings.

In January 2005 Bethany employed her first Director of Christian Education, Catherine (Cathy) Mooney.  In April of that year it employed Carolyn H. Starling to be the Church Secretary and in the fall employed Samuel L. Meares to the Director of Church Music.  Under the capable leadership of this team Bethany continues to expand it ministry to the congregation and community.

In April, 2009, Rev. Whitney retired after over 40 years as Bethany’s pastor.  Following his retirement, Rev. Jennie Leake Hemrick served as Interim pastor for three years, resigning in August of 2012.

Following an extensive search, Bethany called Rev. John W. Johnson to serve as pastor in January of 2013.  During Rev. Johnson’s time at Bethany, the church has been transitioning into the information and technological age with a new website, social media presence, use of technology in worship, and the exploration of alternative worship experiences.  Christian Education continues also to be a focus as new programs continue to be implemented. John retired in 2021.
​
Music director Kevin Uppercue resigned his position in October of 2015, and after auditioning and interviewing several excellent candidates, Christopher Bagley was hired as Music Director in January of 2016. Chris as invigorated our worship services with his energy and musical excellence!

get to know the presbyterian church (USA)

The paragraphs below come directly from the home page of our denomination's website - www.pcusa.org.  This should give you a clearer understanding of who are are as Presbyterians.

Through the grace of our Lord Jesus Christ, the love of God, and the communion of the Holy Spirit, we trust in the one triune God, the Holy One of Israel, whom alone we worship and serve.

God comes to us in free and undeserved favor in the person of Jesus Christ who lived, died, and rose for us that we might belong to God and serve Christ in the world. Following Jesus, Presbyterians are engaged in the world and in seeking thoughtful solutions to the challenges of our time.

Presbyterians affirm that God comes to us with grace and love in the person of Jesus Christ, who lived, died, and rose for us so that we might have eternal and abundant life in him. As Christ’s disciples, called to ministry in his name, we seek to continue his mission of teaching the truth, feeding the hungry, healing the broken, and welcoming strangers. God sends the Holy Spirit to dwell within us, giving us the energy, intelligence, imagination, and love to be Christ’s faithful disciples in the world.

More than two million people call the Presbyterian Church (U.S.A.) their spiritual home. Worshiping in 10,000 Presbyterian congregations throughout the United States, they engage the communities in which they live and serve with God’s love.

Visit the website of the Presbyterian Church (USA) by clicking HERE.